Correlative light and electron microscopy (CLEM) enables you to obtain a complete overview of a cell, while at the same time analyze biomolecules in that same cell on the scale of a few nanometers.

What is correlative light and electron microscopy?

What is Integrated CLEM ?

How does Integrated CLEM work?

How can researchers benefit from using Integrated CLEM?

What is correlative light and electron microscopy?

In order to analyze various aspects of the complex organization of cells, there is increasing demand to study the same sample at different length scales in biology. The great potential of CLEM lies in the combination of two modalities: multi-color labelling together with high resolution contextual information. Therefore, CLEM enables you to correlate the two different types of information on the exact same area of interest: cellular function (from FM) and ultrastructure (from EM).

This combined power makes it a powerful technique, finding application in several fields in the life sciences, such as neuroscience, cell biology and tissue research, to name just a few. In recent times, advancements in super-resolution optical techniques have further enhanced the value that CLEM can bring to research in biology, as a result of sub-diffraction limited optical microscopy performed using a range of techniques such as STORM, PALM, STED and SIM.

Traditionally, CLEM is performed by correlating the results from the two different microscopy modalities, acquired using separate instruments, at separate locations, using potentially different sample preparation protocols. That approach results in workflows which are notoriously time-consuming, risk sample contamination, and require high levels of expertise. Furthermore, creating an accurate unbiased overlay requires an independent set of features which can be used to align both modalities.

To break through these barriers in performing CLEM, Delmic has developed a user-friendly CLEM solution that adds to the power of CLEM by enabling the user to switch between optical and EM contrast in one system.

CLEM is the perfect tool for studying the complex relation between form and function in biology.

While FM and EM are powerful techniques in their own right, they are not without drawbacks. Fluorescence imaging provides valuable functional information but is very limited in resolution, whereas EM, although high resolution, lacks functional information, meaning that identifying cells based on EM alone is error-prone. Neither imaging mode by itself can therefore provide complete information. Performing CLEM allows you to have the best of both techniques.

Fluorescence microscopy owes its popularity to the immense variety of labelling strategies that can be employed. Samples can be dyed, immuno-labeled, or tagged using genetically encoded fluorescent proteins. Furthermore, thanks to the spectral properties of these fluorescent tags, multiple labels can be identified simultaneously using excitation light of different wavelengths. In this manner, different parts of the cell, and therefore different cellular functions, can be imaged simultaneously, forming a multi-color fluorescence image. 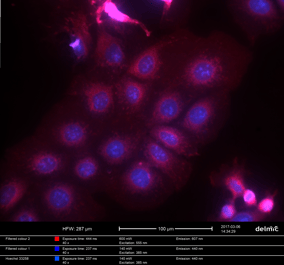 
Fluorescence is the phenomenon of the emission of light upon the absorption of a photon. As shown in the diagram, when a molecule in ground state absorbs a photon, it is excited to a higher energy state from where it can decay to intermediate lower energy states. What decay channels are available depends on the molecule and its environment. The difference in energy between the ground state and the intermediate state may be given out as a photon, the emission of which is called fluorescence. Fluorescence microscopy is based on the imaging of fluorescent molecules that are selectively attached to different parts of a cell or organism.

Figure 3: Example of a Jablonski diagram of a fluorophore. This diagram depicts the processes that occur which cause an object to convert light from one wavelength to fluorescent light. Ground state energy states are shown in blue. Highest energy state is shown in orange and the lowest single excited state is shown in red.

Electron microscopy is a powerful method for acquiring high resolution structural information at the nanometer scale. Because the wavelength of accelerated electrons is much shorter than that of visible light, the diffraction barrier of light can be overcome and much smaller features can be visualized.

What distinguishes light from electron microscopy is not only the resolution. The type of contrast that is typically measured in EM is very distinct from FM. Whereas in FM one can only detect specific macromolecules that have been labeled, in EM one acquires primarily contextual information. In other words, you see everything there is. Examples of useful applications of EM in the life sciences include membrane structures such as the endoplasmic reticulum, the Golgi apparatus, and vesicular structures.

Electron microscopy, often performed in a Scanning Electron Microscope (SEM), focuses a beam of high energy electrons (typically upto 30 keV) onto the surface of a sample. A host of scattering processes takes place upon the interaction of the beam with the atoms in the material, resulting in the generation of, among others, low energy secondary electrons (SE’s) and high energy backscattered electrons (BSE’s). These are detected with dedicated detectors. By scanning the beam over the sample, an image is made, which contains different kinds of information about the sample depending on the electrons detected, such as topography and density.

What is Integrated CLEM?

Integrated CLEM is an unique technique innovated by Delmic that integrates  light and electron microscopy in one device so that switching from fluorescence to electron imaging is seamless and instantaneous. No more sample transfer from one system to another: just load your sample and accurately correlate two different types of information on the exact same cell or structure of interest.

The  idea of Integrated CLEM is equipping a SEM with an inverted fluorescence microscope. Delmic has developed the World’s first integrated CLEM platform, SECOM, which can be retrofitted on any standard SEM,.  to perform Integrated CLEM speedily and easily.

CLEM is a great technique for life science applications. Acquiring fluorescent and electron images simultaneously, however, can be challenging, but there is a way to overcome them with the integrated CLEM technique by Delmic. Watch the webinar to learn how!

How does Integrated CLEM work?

Currently, Integrated CLEM can be used on two platforms which work together with a SEM: SECOM and SECOM SR.

The SECOM and SECOM SR platforms can be retrofitted on a SEM by replacing the door to the chamber of the SEM. This replacement consists of a motorized sample stage and the objective and light path for the optical microscope.

Watch the webinar below to understand how Integrated CLEM works with the SECOM platform.

How do researchers benefit from using integrated CLEM?

Integrated CLEM allows you to focus on your research, overcoming labor-intensive imaging, by providing an automated solution for achieving unbiased results.

Conventionally, performing CLEM has lots of challenges. Constantly switching from one microscope to another is time-consuming and often contaminates the sample. Since the two microscopes have very different fields of view, accurately overlaying the two images is highly non-trivial and prone to bias. And the sample preparation for the two imaging techniques are not the same, which means that it is not exactly the same sample that is being imaged in FM and EM. All in all, performing CLEM requires skilled operators, research expertise and is very labor-intensive.

With the introduction of Integrated CLEM, many difficulties of traditional CLEM can be overcome:

Integrated CLEM is designed to help research in biology move faster and deeper by acquiring both structural and functional information simultaneously. Scientific research in life sciences should be able to focus on understanding the complex data acquired, instead of focusing on the complexity of the instruments  needed for acquiring it. Therefore researchers in biology can greatly benefit from using Integrated CLEM with its simplified workflow and powerful insights into cells.

With the easy-to-use Integrated CLEM you can directly image the right location at a high resolution and overlay the optical and EM images with ease. Moreover, in a superresolution CLEM system, you can perform sub-diffraction limited imaging using a STORM-based technique with standard fluorescent proteins.

In short, Integrated CLEM, an innovative solution is designed to empower you to answer more fundamental research questions and carry out brand-new findings by scaling up and fasten your research.